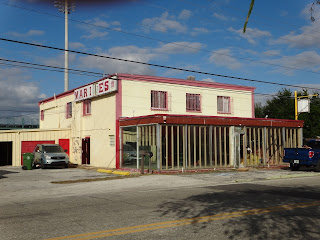 It may not look like a brewery yet, but it's getting there!

Hey there folks, it's been a while. . . but progress is progress and these things take time.  In November The Little Giant Brewery was unanimously voted by the Bradenton Planning Commission to move forward.  Great news!! The next step is to present our case for good beer in front of the Bradenton City Council on December 14, 2012. This is exciting stuff!

In the meantime we've been working on getting moved over to our new location near Mckechnie Field in downtown Bradenton.  Baseball and beer will never be enjoyed this much anywhere, I promise.

But let's get back to what is most important ----- BEER! We've been working on our traditional Dusseldorf-style Alt Bier as of late, as well as the Dry Stout.  They've been well received so far and your  opinion is appreciated -- so come over to the brewery and try some!

Until then, support your local brewery!
Posted by The Little Giant Brewery at 2:39 PM No comments: